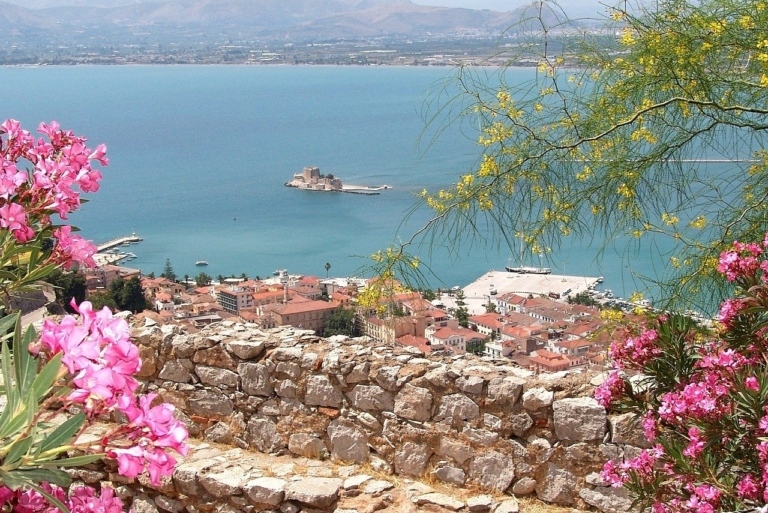 Nafplio is a seaport town in the Peloponnese in Greece that has expanded up the hillsides near the north end of the Argolic Gulf. The town was an important seaport held under a succession of royal houses in the Middle Ages as part of the lordship of Argos and Nauplia, held initially by the de la Roche following the Fourth Crusade before coming under the Republic of Venice and, lastly, the Ottoman Empire. The town was the capital of the First Hellenic Republic and of the Kingdom of Greece, from the start of the Greek Revolution in 1821 until 1834. Nafplio is now the capital of the regional unit of Argolis.

The name of the town changed several times over the centuries. The modern Greek name of the town is Nafplio (Ναύπλιο). In modern English, the most frequently used forms are Nauplia and Navplion.

During the Late Middle Ages and early modern period, under Venetian domination, the town was known in Italian as Napoli di Romania, after the medieval usage of “Romania” to refer to the lands of the Byzantine Empire, and to distinguish it from Napoli (Naples) in Italy.

Also during the early modern period, but this time under Ottoman rule, the Turkish name of the town was Mora Yenişehir, after Morea, a medieval name for the Peloponnese, and “yeni şehir”, the Turkish term for “new city” (apparently a translation from the Greek Νεάπολη, Italian Napoli). The Ottomans also called it Anabolı.

In the 19th century and early 20th century, the town was called indiscriminately Náfplion (Ναύπλιον) and Nafplio (Ναύπλιο) in modern Greek. Both forms were used in official documents and travel guides. This explains why the old form Náfplion (sometimes transliterated to Navplion) still occasionally survives up to this day.

Nafplio is situated on the Argolic Gulf in the northeast Peloponnese. Most of the old town is on a peninsula jutting into the gulf; this peninsula forms a naturally protected bay that is enhanced by the addition of man-made moles. Originally almost isolated by marshes, deliberate landfill projects, primarily since the 1970s, have nearly doubled the land area of the city.

The area surrounding Nafplio has been inhabited since ancient times, but few signs of this, aside from the walls of the Acronauplia, remain visible. The town has been a stronghold on several occasions during Classical Antiquity. It seems to be mentioned on an Egyptian funerary inscription of Amenophis III as Nuplija.Nauplia (Ancient Greek: ἡ Ναυπλία) was the port of Argos, in ancient Argolis. It was situated upon a rocky peninsula, connected with the mainland by a narrow isthmus. It was a very ancient place, and is said to have derived its name from Nauplius, the son of Poseidon and Amymone, and the father of Palamedes, though it more probably owed its name, as Strabo has observed, to its harbour. Pausanias tells us that the Nauplians were Egyptians belonging to the colony which Danaus brought to Argos; and from the position of their city upon a promontory running out into the sea, which is quite different from the site of the earlier Grecian cities, it is not improbable that it was originally a settlement made by strangers from the East. Nauplia was at first independent of Argos, and a member of the maritime confederacy which held its meetings in the island of Calaureia. About the time of the Second Messenian War, it was conquered by the Argives; and the Lacedaemonians gave to its expelled citizens the town of Methone in Messenia, where they continued to reside even after the restoration of the Messenian state by the Theban general Epaminondas. Argos now took the place of Nauplia in the Calaureian confederacy; and from this time Nauplia appears in history only as the seaport of Argos. As such it is mentioned by Strabo, but in the time of Pausanias (2nd century) the place was deserted. Pausanias noticed the ruins of the walls of a temple of Poseidon, certain forts, and a fountain named Canathus, by washing in which Hera was said to have renewed her virginity every year.

The Acronauplia has walls dating from pre-classical times. Subsequently, Byzantines, Franks, Venetians, and Turks added to the fortifications. In the middle ages Nauplia was called τὸ Ναύπλιον, τὸ Ἀνάπλιον, or τὰ Ἀνάπλια. It became a place of considerable importance in the middle ages, and has continued so down to the present day. In the time of the Crusades it first emerges from obscurity. Nafplio was taken in 1212 by French crusaders of the Principality of Achaea. It became part of the lordship of Argos and Nauplia, which in 1388 was sold to the Republic of Venice, who regarded it as one of their most important places in the Levant. During the subsequent 150 years, the lower city was expanded and fortified, and new fortifications added to Acronauplia.

The city, under Venetian rule twice repelled Ottoman attacks and sieges, first by Mehmed the Conqueror during the Ottoman–Venetian War (1463–79) and then by Suleiman the Magnificent. The city surrendered to the Ottomans in 1540, who renamed it Mora Yenişehri and established it as the seat of a sanjak. At that period, Nafplio looked very much like the 16th century image shown below to the right.

The Venetians retook Nafplio in 1685 and made it the capital of their “Kingdom of the Morea”. The city was strengthened by building the castle of Palamidi, which was in fact the last major construction of the Venetian empire overseas. However, only 80 soldiers were assigned to defend the city and it was easily retaken by the Ottomans in 1715. Palamidi is located on a hill north of the old town. During the Greek War of Independence, it played a major role. It was captured by forces of Staikopoulos and Kolokotronis in November 1822.

During the Greek War of Independence, Nafplio was a major Ottoman stronghold and was besieged for more than a year. The town finally surrendered on account of forced starvation. After its capture, because of its strong fortifications, it became the seat of the provisional government of Greece.

Count Ioannis Kapodistrias, first head of state of newly liberated Greece, set foot on the Greek mainland for the first time in Nafplio on 7 January 1828 and made it the official capital of Greece in 1829. He was assassinated on 9 October 1831 by members of the Mavromichalis family, on the steps of the church of Saint Spyridon in Nafplio. After his assassination, a period of anarchy followed, until the arrival of King Otto and the establishment of the new Kingdom of Greece. Nafplio remained the capital of the kingdom until 1834, when King Otto decided to move the capital to Athens.

Tourism emerged slowly in the 1960s, but not to the same degree as some other Greek areas. Nevertheless, it tends to attract a number of tourists from Germany and the Scandinavian countries in particular. Nafplio enjoys a very sunny and mild climate, even by Greek standards, and as a consequence has become a popular day or weekend road-trip destination for Athenians in wintertime.

Nafplio is a port, with fishing and transport ongoing, although the primary source of local employment currently is tourism, with two beaches on the other side of the peninsula from the main body of the town and a large amount of local accommodation.

The building of the National Bank of Greece is probably the only example to have been built in the Mycenaean Revival architectural style.

Bus
Since 1952, the town has been served by public bus (KTEL Argolida), which provides daily services to all destinations in region as well as other major Greek centers such as Athens. The journey to Athens takes two to two hours and 20 minutes, going via Corinth/Isthmos and Argos.

The town is connected by a branch line of ten kilometers from Argos to Nafplio. In 2011, the Corinth–Tripoli–Nafplio train service was suspended during the Greek financial crisis. There was a plan to re-open the line as an extension of the suburban railway that connects Corinth with Athens, but that has not happened.

Acronauplia is the oldest part of the city though a modern hotel has been built on it. Until the thirteenth century, it was a town on its own. The arrival of the Venetians and the Franks transformed it into part of the town fortifications. Other fortifications of the city include the Palamidi and Bourtzi, which is located in the middle of the harbour.

Nafplio maintains a traditional architectural style with many traditional-style colourful buildings and houses, influenced by the Venetians, because of the domination of 1338–1540. Also, modern-era neoclassical buildings are also preserved, while the building of the National Bank of Greece is an example of Mycenaean Revival architecture.

It is one of the few Greek cities not affected by the laws of antiparochí (which demolished old mansions all over Greece), also with efforts of the archaeologist Evangelia Protonotariou Deilaki, even against local interests, preserving so, much of its architectural heritage.

Around the city can be found several sculptures and statues. They are related mostly with the modern history of Nafplio, such as the statues of Ioannis Kapodistrias, Otto of Greece and Theodoros Kolokotronis.

Please enter your username or email address. You will receive a link to create a new password via email.